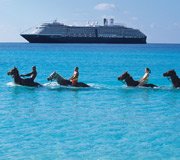 As the sun sets over Pacific waters, there are few better ways to enjoy the shimmering spectacle than while sipping a cold drink and gliding out to the horizon. Experience it aboard a Holland America cruise which saves $140 on competing offerings and includes $150 in credits per cabin.

Sailings along the Californian and British Columbian coastline are sought after because they occur just a few times a year and sell out quickly. Itineraries vary — here are some of our favourites (prices include taxes, meals and onboard entertainment):

Guests receive a $50 airfare credit per person ($100 per cabin based on double occupancy) to offset some of the cost of travelling to or from ports. Also included is $50 per cabin to put towards a hotel stay before or after the cruise.

Described by Cruise Critic as “venerable,” Holland America Line is steeped in tradition dating back more than 140 years. Its newly enhanced ships are colourful and decorated with fine art, afternoon tea is a daily staple, and dining occurs in an elegant atmosphere.