Colin Savage has spent a lifetime staying fit and healthy, but one long airplane flight changed that.

Until recently, the 64-year-old Victoria man would cycle an average of 400 kilometres a week and run marathons. Now he is short of breath and has trouble moving around.

In January, Savage travelled to Argentina on a hiking trip. The trip home included a 10-hour flight from Chile to Toronto on an Air Canada 777 airplane. 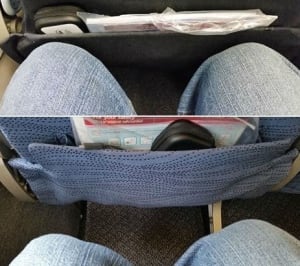 Savage says for most of the flight, passengers were discouraged from getting out of their seats because of turbulence. At 6-2″, that was a problem for Savage.

“In their seats, my knees were up against the seat in front of me. I was constantly squirming around trying to get comfortable.”

A day and a half after he returned home, he felt a sudden sharp pain in his lower back. When it was still there the next morning he went to a hospital.

“I went through horrible pain, I don’t know if you’ve broken a rib, I have, and this pain was a hundred times worse,” Savage says.

Two CT scans later, doctors told Savage he had deep vein thrombosis (DVT), which was likely the result of having to sit for most of the 10-hour flight, and that blood clots had migrated up his leg, through his heart and into his lungs.

DVT is a condition where a blood clot develops within a deep vein, usually in the thigh or leg. It can break off and make its way to the lungs, where it can cause breathing problems.

According to the World Health Organization, passengers traveling in cramped areas for more than four hours are at risk.

Savage raised the DVT issue with Air Canada and got this response:

“Medical evidence has shown that deep vein thrombosis (DVT) is the result of a pre-existing personal medical condition, related to an individual rather than a transportation system. International courts have confirmed that based on the aforementioned evidence there is no liability to air carriers for DVT that occurs during a flight.”

This is a very scary condition and personally I always try to walk a little bit but one of my friends who was a pilot always tells me to stretch and stay active for these long flights. The longest flight I took was SFO to SYD and in Premium Economy we had lots of room but for my taller friends I can certainly see how it would be painful.

I took a flight from Toronto to Cayo Coco in Cuba once with Skyservice and my friend who was 6’3″ had problems in the flight (even my legs were pushed against the seat in front of me.