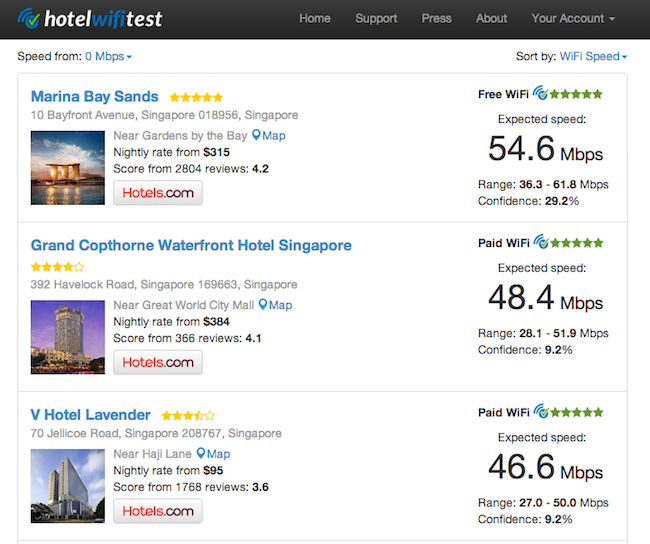 One of my must haves is free wifi when I am on the road (as a blogger and someone that is always connected).

Many hotels offer this but sometimes it could be slower than a Starbucks in Seattle!

Hotel WiFi Test is crowdsourcing its speed data by having you test the Wi-Fi in a hotel. It can pin down your location and run a speed test.

For many travellers, WiFi speed is a vital feature of a hotel room, and is a major selling point for everyone from businessmen to backpackers. However, most hotels don’t actually care much about the WiFi quality since they can always advertise “Free WiFi”, which doesn’t make any claims about the actual quality or speed. Free is always a good price, but travelers are often disappointed by the WiFi quality they find.

As its name suggest, Hotel WiFi test is a site that lets you find out the internet speed of hotels around the world. It relies on user generated content though: meaning users have to go to hotels and test the WiFi, simply by running the site and it will automatically pin down your location and run a speed test. After the website uses your internet location to check your approximate location, it shows you a list of hotels near you. You simply select the hotel you are in and the website will check your speed and figure the results into the rating.

Currently, the website lists a few hundred tested site from popular locations around the world, and in Singapore, over 34 hotels have been tested for their WiFi speed at the time of this writing. Some of the hotels include Marina Bay Sands, which has the highest internet speed of all the hotels tested in Singapore, Grand Copthorne Waterfront, Shangri-La, The Fullerton and many more. Other than Singapore, 33 hotels in Bangkok have also been tested for their internet speed.

Try it out today (when you are travelling).